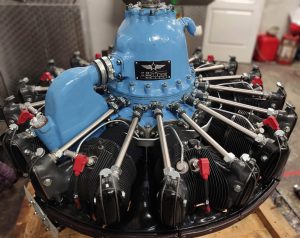 A G Ivchenko developed the AI 14 engine in 1948 as a standard engine for all Russian light aircraft, producing 260 hp. In the early 1950s, Ivchenko began work on turbo-prop engines, and in their wisdom the Russian authorities decided to allow him to concentrate on turbine engines and then gave the basic AI 14 design to four different engine manufacturers. From the early 1960s, part of the original design bureau, based in Voronezh, Russia, came under the control of I M Vedeneev, and he undertook a significant redesign of the AI 14 in order to produce more power and developed the M 14 P engine of 360 hp. Although the basic engine was very similar, it was significantly strengthened to develop more power – for example the M 14 has six satellite gears in the gearbox, whereas the AI 14 has only three.

The basic AI 14 design was given to PZL in Poland, who made no significant changes and continued to produce the engine for many years, and of course it was the standard engine in the Wilga. The AI 14 design was also given to LOM in Czechoslovakia who again made various modifications to produce the M462 engine of 305 hp and used in the Zlin crop-spraying aircraft. Finally, the design was also given to the Chinese, together with the design of the Yak 18 A military training aircraft – of course the predecessor to the Yak 52. The Chinese decided to completely redesign the aircraft to produce the Nanchang CJ-6, but did very little to change the engine for their use. Several thousand Nanchang CJ-6 were manufactured, of course for the Chinese air force but also for the air forces of friendly countries.

Chinese overhauls of these engines

The Chinese government decided to sell large numbers of surplus used Nanchang aircraft into Western civilian markets where they have been a great success, and indeed are an excellent aircraft, and better in many respects than the Yak 52. At the same time, the Chinese offered overhauled engines to Western owners operating Nanchang aircraft. From what we have seen, these overhauls were not particularly high quality – seemingly disassembly; a good clean; new piston rings; grinding valves; possibly changing crankshaft bushings; painting and some test running. But certainly good enough for a good period of further use.

However, approximately four years ago, for reasons that are somewhat inexplicable, the Chinese government decided that they would not overhaul any engines unless for their own air force. We have not seen any explanation for this decision, and it does seem surprising that they would not even overhaul engines for friendly air forces using Nanchang aircraft – and indeed we have been approached by the air forces in both Sri Lanka and Bangladesh to see if we could overhaul their HS-6 engines.

Three years ago, we obtained two HS-6 engines and carefully dismantled them, comparing every component both in terms of material used; dimensions and so forth with the AI 14 engine with which we are very familiar. As we expected, the differences were relatively small, and all the differences are given in the table below. As can be seen, the differences are typically not significant, and probably the only one of significance is the change in the supercharger drive ratio – and clearly this is where the additional 25 hp increase was obtained with the Chinese engine. However, again as can be seen from the table, we have worked out the solution to all these small differences in terms of overhauling the Chinese engine. 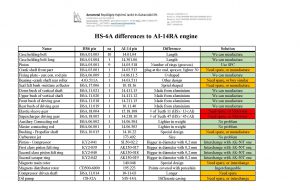 Our program to overhaul the Housai engine 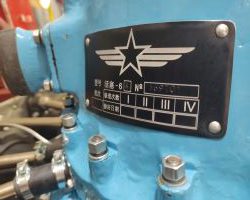 We see there being two somewhat different markets for these overhauls. Firstly, for the military market, and indeed we are in discussions with the air forces in both Bangladesh and Sri Lanka; we can see that their requirement is for an engine that is absolutely standard, so our proposals have been to keep the engine as original as possible, but to use the significantly superior Carillo pistons, which are made of a far better aluminium which expands at almost the same rate as the steel cylinder so the clearance when cold can be considerably reduced, thus minimising oil consumption; preventing fouled sparking plugs and also giving additional power. And also the technical specialists in these air forces seem to accept the idea of our excellent automotive plug conversion. But otherwise the engines would remain as standard.

However, for the civilian market, we believe an important issue is the need to produce an engine of significantly more power than standard, which would hopefully overcome the natural tendency of some owners to go to the considerable extra expense of converting their aircraft to the M 14 engine, which involves important airframe modifications and of course the requirement for a new propeller. So we set ourselves the target of developing an engine which, at increased rpm, would be capable of delivering 370 hp, on the calibrated dynamometer at Aerometal.

The modifications required for increased power 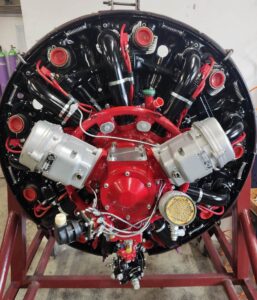 Our overhauls of HS-6 engines

These include painting the engine in the colour of the customer’s choice, and of course we can use different colours for separate parts like magnetos; valve covers et cetera; nickel plating of all exposed metal parts; incorporating our new automotive plug conversion kit and our AYC coils; the high-compression Carillo pistons with modern piston rings; assembly to much tighter tolerances; balancing to a factor that is three times as good as originally allowed; every part of the engine totally overhauled to a condition that we believe is better than factory new since we are using skilled specialists rather than production-line workers; testing the engine for a minimum of three hours on a proper dynamometer and all results given to the customer. 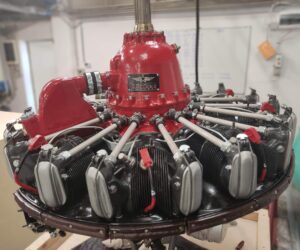 p; at 2500 rpm, 355 hp and a very impressive 378hp at 2600 rpm. We would only recommend that owners would use 2600 rpm for short periods, although it should be noted that our higher powered versions of the M 14 PF operate at 3100 rpm, but of course it is a stronger engine with stronger connecting rod; bigger piston pins and so forth.

This issue of engine rpm is interesting. The AI 14, on which the HS-6 is based, and indeed both engines are almost identical, apart from the increased supercharger gearing of the Housai, developed 260 hp at 2250 rpm, and the increase in supercharger speed is the reason for the additional 25 horsepower with the Housai. But the Russians developed the AI 14 RF version which was absolutely unchanged, but developed 300 hp at higher rpm. Our understanding that this was at 2450rpm, but it is clear that increasing rpm makes a significant contribution to power on these engines.

As part of this process we have prepared a detailed overhaul manual complete with all the Chinese part numbers as well as making a new and perfect data plate for all new engines.

In order to take advantage of this enhanced power, it’s clear that the engine will require a much more efficient propeller. So we have been discussing the issue with GT propellers in Italy, and they have designed a new propeller, based on the existing Housai propeller hub but with modern blades, and this has proved very successful in testing and is in current production.

We are currently working on orders for a further eight Housai overhauls, all to the same specification, but in various paint colours. While we cannot begin working on any other engine for at least three months, as per our normal practice we will place new orders in the order that they are given to us; we make no up-front charge; we only charge a 15% deposit when we actually start working on the engine – whether the customer’s own engine or one from our stocks  – and then a final 85% only when the engine has been successfully tested and the results given to our customer.

Please contact us with any questions you might have or to place an order for a perfect HS-6 engine!