Exceptional opportunity to purchase a new and never used V-530 propeller which has just had a full check at the Shakti  factory in Russia with all new seals and gaskets. Euro 7,000 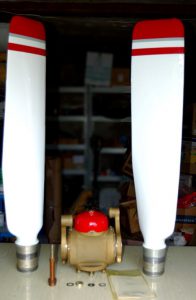 Historically all Russian light aircraft (Yak plus Sukhoi) used the V-530 2-blade propeller. Owners today have, however, the opportunity to use significantly superior 3-blade propellers, principally from MT in Germany .

In any case, we are main agents for MT-Propeller, and can provide any of the new propellers that they manufacture, as well as overhauling used propellers. Please contact us for quotations. For further information on MT-Propellers, please see our MT-Propeller page.

It is worth mentioning Russian MTV-9 propellers. MT, some 20 years ago, gave a licence to Speriott (above) to produce the MTV-9-250-27 propeller.

Speriott however failed to declare a large proportion of their production to avoid paying royalties and in consequence MT instituted litigation against Speriott and, for western owners more importantly, they refuse, in any way, to support these propellers. So be warned if you have such a propeller MT will do everything it can do to ensure that these propellers cannot be overhauled in the west.

It is also worth pointing out that they are restricted to the older blade profile of -27.