When we first began selling MTV propellers for Russian aircraft some 25-years ago, there was only one available propeller, the MTV-3-250. Since then, and to a large extent as a result of our suggestions, the situation is more complex with more choice for customers, and inevitably with more difficulties in ordering, and from our point of view in stocking!

To examine these separately:

All Sukhois and Yak-50 can accommodate the 260cm. Some Yak-55s tend to have undercarriages that ‘sag’ and therefore can have clearance problems with the 260cm.

A further complication is that MT now offer small and large spinners. 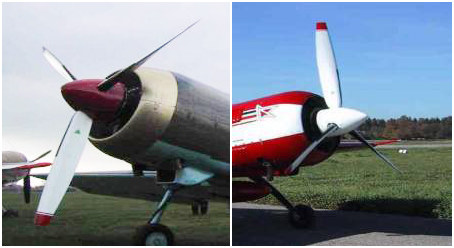 We sell about two large spinners for each small spinner, and although the reasons for choice are often purely aesthetic, we have found that the larger spinner gives slightly better engine cooling,  due to better airflow.

We would also point out that although spinners and propellers are priced separately, after manufacture it is difficult to change, since the primary balancing for the propeller is attached to the spinner back-plate during manufacture.

Governors: MT produce an excellent lightweight governor, which saves approximately 0.75 kilograms (2lb), and is specifically designed for aerobatics, being very quick-acting in pitch-change.

Special Colours: The standard colour of an MT propeller is white with red tips, but any other colour combination can be organised.