Richard Goode is one of the better known individuals on the UK aircraft scene. Although he trained as a lawyer and worked for some 25 years as a corporate “headhunter”, his real love has always been aviation. Having learned to fly in 1970 he quickly became involved in aerobatics, initially with a Chipmunk before moving on to a Stampe, which in turn gave way to a Pitts Special. 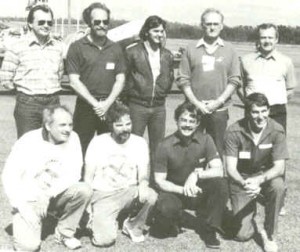 With the latter aircraft he competed in his first World Championship in 1978, at the same time beginning a totally separate career as an air-show display pilot. He competed in the British Team until 1984, his best placing being 16th in the world in 1980.

Ever since competing against the Yak-50s he spent much of his time working out how to acquire such a fantastic and exotic aircraft – which at that stage, at the height of the Cold War, was a totally unattainable dream.

However, he is not a man to be deterred lightly, and pursued the Russians directly, both through the Russian trade officials in London, but also directly with Yakovlev and other organisations in Russia. However, the break came when East Germany decided to sell six of its Yak-50s, of which Richard bought four, two were kept to operate as the ‘Vladivar’ aerobatic team and two were sold on to the USA.

This involvement in Russian aircraft led to a direct approach from Sukhoi, who in 1990 were beginning full-scale production of the new SU-26M. Richard bought the first one delivered to Europe and since then has become significantly the world’s largest dealer in Sukhoi aircraft.

Richard suffered a major accident in 1984 when, doing an air display in a modified Laser aircraft, most of one wing detached, resulting in much of that year being spent in one hospital bed! Since then the pressures of business, at that stage both consulting and aviation, bought his competition flying to an end. However, he continued to operate an extremely successful air display team, which at its peak did no less than 124 air displays in one year, operating two Extra 300 aircraft and one Sukhoi.

They were the first organisation to import privately owned Russian aircraft into the West, with two Yak-50 aircraft some 23 years ago and then imported the first Sukhoi aerobatic aircraft into Europe 20 years ago.

The business today, although small, is undoubtedly the world market leader in Russian aircraft, having sold over 400 aircraft and 350 engines to some 18 different countries.

However, while the numbers of aircraft that have been sold are obviously a criterion of the service given, he firmly believes that they should not be judged on this alone.

He recognises only too well that the levels of factory support for such aircraft, are, by Western standards, often poor, and for this reason a great deal depends on the ability of the dealer to provide quite exceptional standards of service. He really believes that they do this and would be delighted to allow any prospective customer to speak to existing ones of that particular type of aircraft.

In order to support these Russian aircraft he established Russian Engineering at White Waltham Airfield in 1996, but passed control of the business to the owners of the airfield in 2005, although a close relationship continues.
Under this agreement Richard Goode Aerobatics sells aircraft; propellers; engines and their major sub-assemblies, while all maintenance and smaller parts sales are done from White Waltham.