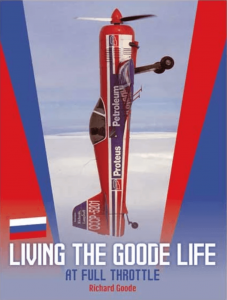 For anybody who may be interested, my autobiography is now available for sale. It’s available to buy from various book sellers, but we do have a number of copies for sale ourselves. Below is the not very modest press release, written by the publisher!

“This is an extraordinary story, beginning with a bare-foot colonial childhood, and indeed not speaking English until he was four, yet ending up at Cambridge, ultimately dealing at the highest levels of the Russian aviation industry. Richard Goode’s life has been a fascinating series of activities, both social and business, dealing with an incredible range of people from the notorious Ugandan dictator, Idi Amin, to whom he was selling banknotes (legally) to a car dealer who was embroiled in the Brinks-Mat gold robbery (illegally); dealing with Russian spies at the behest of MI5; international corporate headhunting and aerobatics at the highest levels. And all this with a huge zest for living life to the full.

Highlights of his life have included:

Throughout, his life been anything but straightforward, with a fair share of crashes and calamities. Financially, he narrowly avoided meltdown in the ruinous Lloyds insurance crash of the 1990s; he successfully faced up to the Russian Mafia and was even served with an Interpol arrest warrant! Most dramatic was the structural failure of his aerobatic plane during a public display resulting in a barely-survivable, catastrophic accident, leading to three months in a hospital bed.

We live in a very sanitised and protected world and it is refreshing to read this story about a man who has been prepared to take risks and also to accept the consequences of them, whether positive or negative. A thrilling, real-life tale.

This book is complemented by a rich selection of appealing and fascinating images.”

We’re already receiving a number of rave reviews for the book!

“…all I can say is just get on and order a copy of Living the Goode Life now! I do not think we will see a better autobiography or even aviation book this year.” Philip Whiteman, Editor, Pilot magazine

“…to my great delight, ‘Living the Goode Life’ arrived today and I haven’t been able to put it down yet.  As well as being fascinatingly interesting, it’s a lovely upbeat book and, characteristically, you only have nice things to say about everyone.  What an amazing life!” David

“Thanks very much for your book which I read with great interest during this past weekend. You are telling so many beautiful and captivating life stories experienced on your journeys spanning truly the entire globe and so many different cultures. I thought the book is very well written and I loved the humour shown in the language and in the many fascinating events described in the different chapters. I think that your hard work, commitment and support is invaluable for a significant community of aircraft enthusiasts and I can say that I probably would not have taken up flying without having come across your website.” Michael

“Your book is fabulous, bloody interesting and brilliantly written” Henry

“What an amazing life story you have to tell. You have not wasted a moment of your time!” Jon