Engine overhauls from RGA and Aerometal 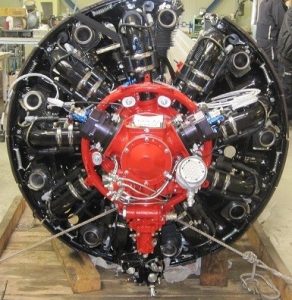 M14PF with Barrett pistons and electronic ignition, to the USA for a Sukhoi

The involvement in these engines from RGA goes back to 1986 when we brought the first Yaks to the West, and of course soon became involved in engine and engine related issues. Over a period of time we found that the principal Russian factories –Vedenyev who designed the engines and the Voronezh Mechanical Plant who actually manufactured the engines – were becoming more and more unreliable and difficult to deal with. Fortuitously, some 16 years ago, we were introduced to Aerometal at Soskut, near Budapest.

The parent company of Aerometal was established in 1959, with an initial emphasis being on the overhaul of the M14V engines for the Kamov 26 helicopters which were in wide use in Hungary in crop-spraying. Now that all the original Russian overhaul factories have effectively disappeared, Aerometal is now significantly the largest and oldest-established business in this world of these Russian radial engines. When Hungary joined the EU, the crop spraying activities were investigated by EU agricultural specialists, who were unhappy about the sorts of Soviet chemicals that were being used, and stopped much of the business. We came to an agreement with Aerometal to replace all their helicopter engine business with fixed wing engine business, and this relationship has continued extremely successfully.

As one of very few companies in Eastern Europe who were authorised to perform total overhauls to zero-time condition on these engines, Aerometal have all original Russian archive material – for example over 2000 pages just for the M 14 P. These list every facet of the overhaul procedure, and also all dimensional requirements for every single part and component. At the bottom of this page you can see two sample pages (out of 162) covering every aspect of the engine analysis, indicating the dimensions that need to be measured and the tolerances that are allowed. 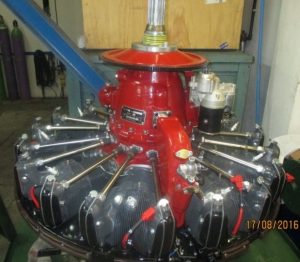 M14PF. electric start and 445hp to USA for Radial Rocket

RGA handles all the commercial activities for Aerometal, with the exception of their historic M 14 V helicopter business. This works extremely well, since it leaves Aerometal free to concentrate on all the technical issues. We are sure that our engines are significantly the best in the world, for a variety of reasons:

We genuinely believe that our engines from Aerometal are not only the best in the World, but significantly better than when they were in new production!

Our business is split into three areas – the overhaul of engines for customers; the supply of totally zero-timed engines for the growing market of constructors building aircraft using engines in the M 14 family, and the supply of fully overhauled engine ancillaries and parts.

We have large stocks of engines (over 60) which are waiting for overhaul, which enables us to accept an order for future delivery; prepare the precise engine that is needed; deliver the engine, and then receive the customer’s old engine when it has been removed. 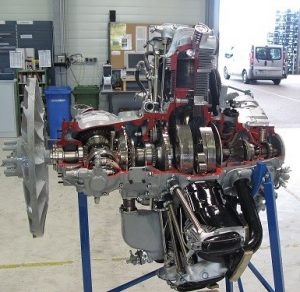 Our engines are assembled to significantly improved standards in various ways, but there are also alternatives in terms of specification:

We are able to provide a complete range of engines from a standard AI 14 RA engine, which from us  typically gives just over 285 hp, up to an M 14 PF with special assembly; Carillo pistons with which we guarantee a reliable 450hp on the dynamometer. 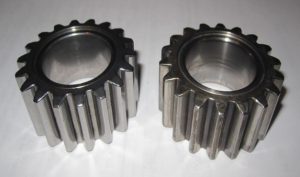 Two gearbox satellite gears. The one on the left has been micropolished

Micro-polishing is a specialised treatment of gears in which the surface of the gear is very carefully polished in the areas that it is meshing with another gear which can significantly reduce friction, and therefore release more power and reduce oil temperatures. We did extensive research on this, working with the well-known UK producer of automotive competition gearboxes, Hewland, and decided that there were thirteen specific gears which would benefit from this treatment. 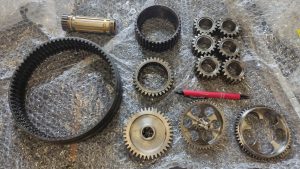 The gears we micropolish. The pen is for scale.

The most important are the six satellite gears in the drive gearbox and the associated ring gear. In addition, we also micropolish the six gears in the accessory and supercharger drives. We estimate that micropolishing will produce an additional 7/9 hp, and reduce oil temperature by 7/10°C.

Please see “Engines for Sale” for our prices.

Overhauls are priced according to the engine, but essentially cover every aspect of the overhaul, with the exception of any parts that might be damaged through overheating; hydraulic lock or whatever.

We are also able to supply, typically on an exchange basis, all ancillary parts, all completely overhauled, such as magnetos; carburetors; governors; compressors; fuel and oil pumps et cetera. In addition we supply complete “PF” supercharger and accessory case conversions which can be simply fitted to an existing engine. Please see our Parts page for our latest Parts Price List.

The principal stages that an engine go through are: 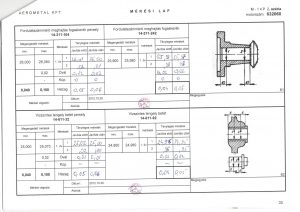 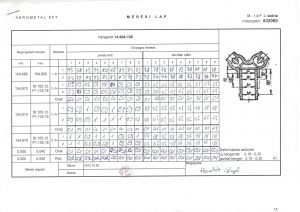 An example  page showing  the  actual dimensions  established during examination of an actual engine, against the required dimensions 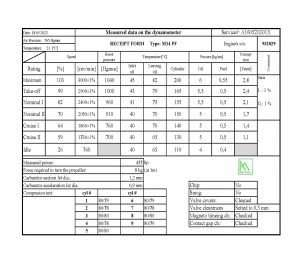